SetLoop is a toolset for Nuke that can loop a set of nodes an amount of times, like a for-loop.
It copies the nodes you place between StartLoop and EndLoop inside the group EndLoop, and reconnects them properly.

There are many more features to it which, combined, make this an actually functional node iterator that can render fractals (like the Mandelbrot and the Julia Set) and animated reaction diffusion entirely in Nuke.

Both 2D and 3D nodes can be looped:

All examples on this page are included in the download!

Since it automates creating a lot (in most cases, hundreds) of nodes, there are some automatic relinking options for external nodes, or references in TCL expressions.

There is also an option to create a knob (‘iteration’) on every node in the loop, with an integer counting the current loop’s iteration.
This knob can then be referenced in expressions to get unique values for each loop iteration.

1. Place the SetLoop folder in your .nuke folder (or somewhere else on your computer)

2. Go to your .nuke folder, and create a file called ‘init.py’. If such a file already exists, open it.

3. In the init.py file, add this line of text to the end and save it:

1. Place the SetLoop folder in the ‘_AutoInstaller’ repository.

NukeShared is a way of installing plugins by dragging/dropping them in folders, see this page for more information.

Reaction Diffusion is often referred to as a chemical process – it is, for instance, a process that describes how the patterns in the skin of animals originate.
I made a simple version of this effect in Nuke by subtracting two different blurs of the same image from each other.
Doing this about 150 times will result in some really cool patterns (and the loop level can also be animated using ‘scroll’ parameter).

The iteration process is done using SetLoop and the node graph looks like this:

Blur2.size has an expression that makes it three times the size of Blur1.size.
Using the ‘iteration’ feature can give some interesting results, and external expression re-linking can, for instance, be used to set all blurs in the loop to be the same size at once.

This is a before-and-after of two different kinds of Reaction Diffusion with different inputs: 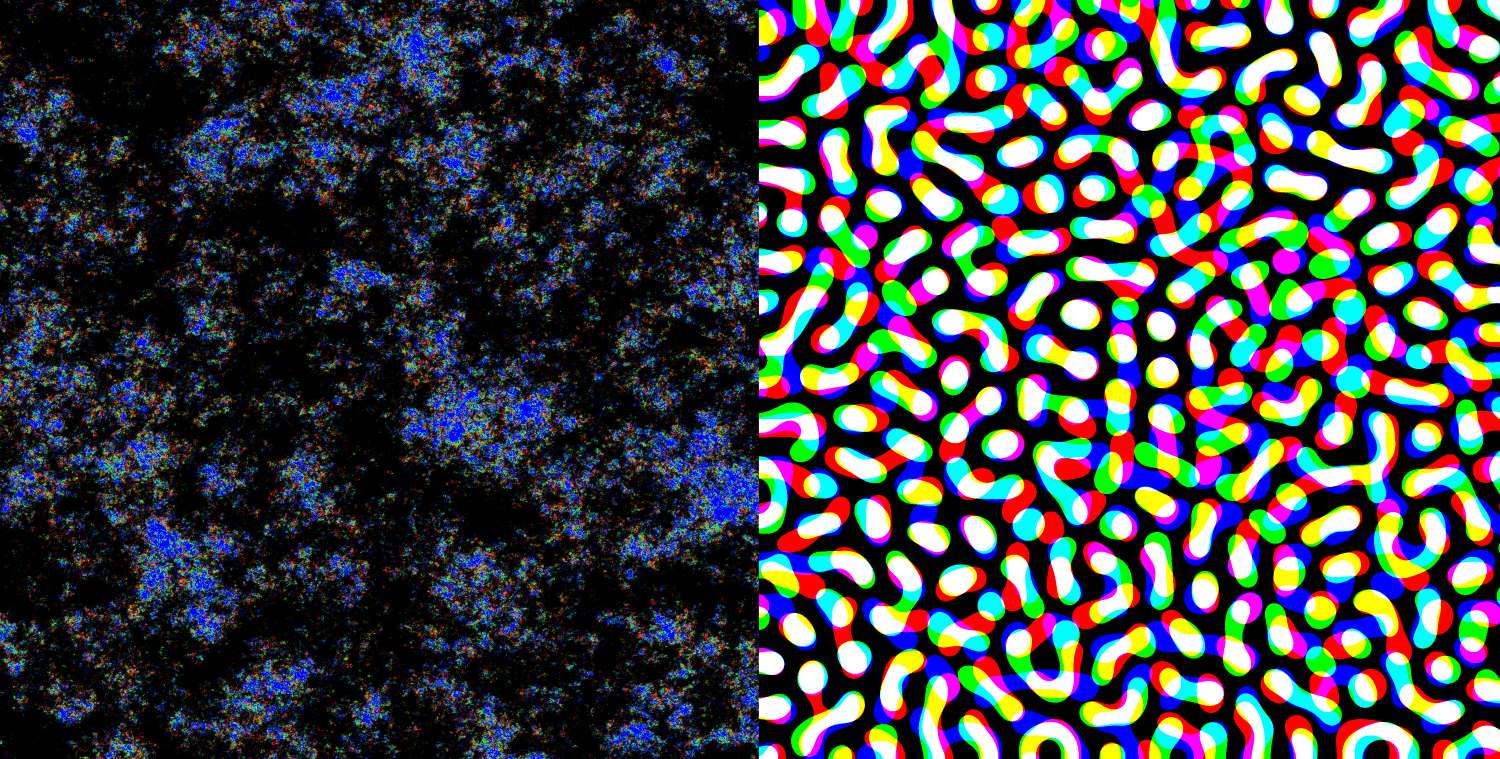 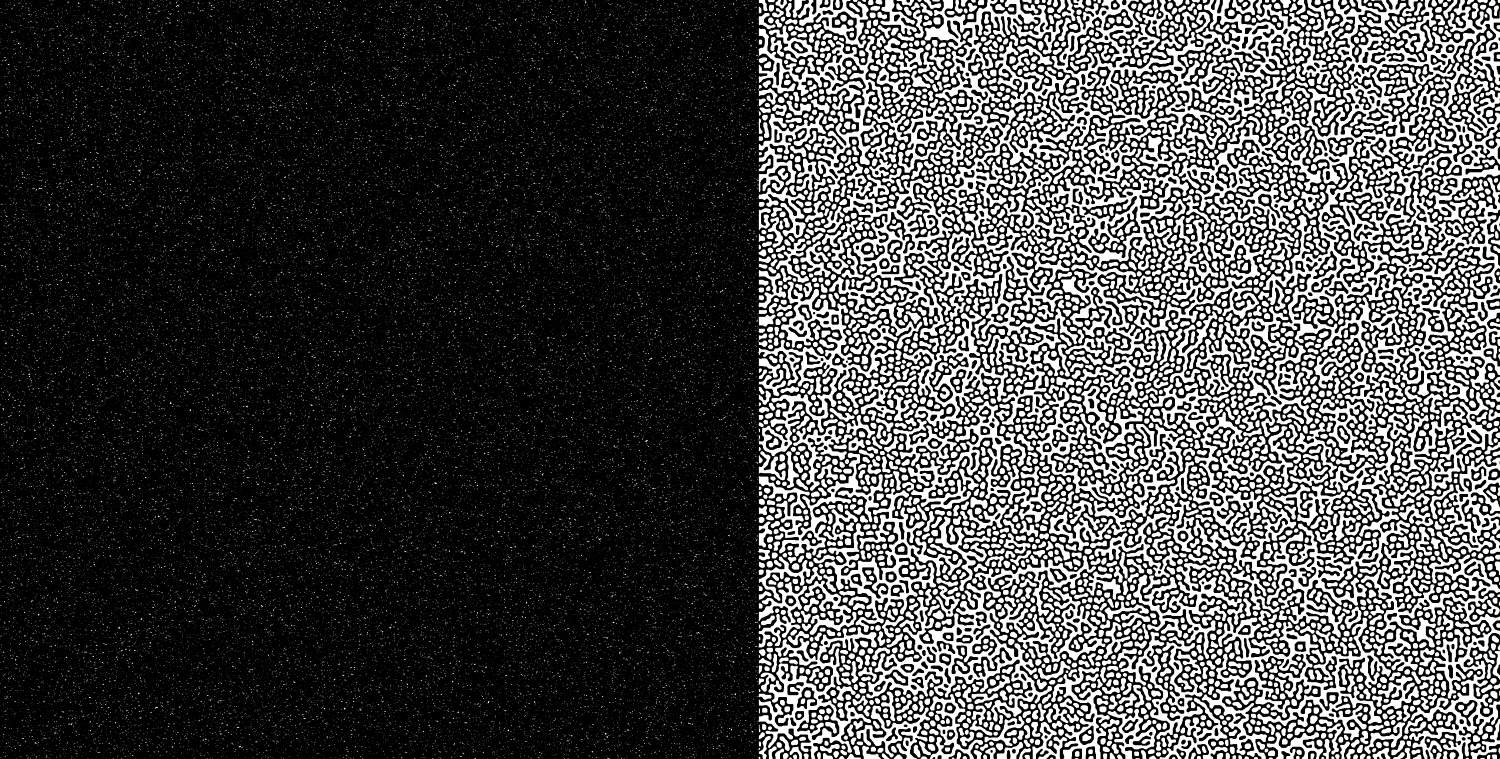 The Mandelbrot set is an amazing set of numbers. The trick is to iterate an Expression node as often as possible over the same pixels.
This iteration process is where SetLoop comes in handy.

First, let’s get a good understanding of the mathematics behind a Mandelbrot set. After that, we’ll look at how to integrate that in Nuke.

The Mandelbrot set uses complex numbers. Complex numbers can be seen as numbers that are in a two-dimensional number system, like coordinates. They consist of a real number (a) and a complex number (b), and are then noted as a + bi. The i is a symbol telling us that the second number is a complex number, but it is also a number itself: i = \sqrt{-1} (and thus i^2 = -1).
This wouldn’t be possible using only real numbers. Khan Academy has some cool visualisations of complex numbers and their behaviour, which also show the importance of visualizing them on a coordinate plane.

Now, what exactly is the Mandelbrot set?

Let’s take the coordinate system of the real and complex numbers as an image with coordinates (x, y) to draw on.
The basis of the Mandelbrot is this very short equation:

As you can tell from the Z repeating itself, this is just one iteration. After this is calculated many times, the result can be measured to be smaller or bigger than 2 (to check if it has ‘blown up’ or not).
Make the values that are bigger than 2 a different color from the ones that aren’t, and you’ll have a Mandelbrot set.
Why 2?

Addition and multiplication with complex numbers is following the standard arithmetic rules, but the format in which they’re written ((a + bi) – or, since we’re using them in a coordinate system: (x + yi)) should be maintained:

Let’s split this result in two – the real, and the complex part:

Now we have the equations for both the real and the complex part, we can finally throw this stuff in Nuke.

Let’s start by recreating the coordinate system (-3 to 3 in both directions).
The red channel will represent all the real numbers, while the green channel represents the complex numbers.
Add an Expression node that does this:

Add a MergeExpression after that, with both A and B connected to Expression1, which makes the first iteration of the Mandelbrot.
It begins with a variable checking whether\sqrt{Br^2 + Bg^2} < 2.

Then, if that variable (‘valid’, I called it in the expression) is true, switch x, y with Br, Bg (red and green from input B) in the first part (the ‘real numbers’-part) of Z, and set the new red value:

For the green channel we’re doing the same, except this is the complex part of Z, so it will be:

One final adjustment: we also want to know how many iterations it took to calculate whether or not a pixel is inside the Mandelbrot. Let’s add that to the alpha, by adding 1 every time valid is true and leaving it when valid isn’t true.

We’re done! This is a visualized Mandelbrot set. Now we just needs to loop this a hundredth times. Let’s make that happen using SetLoop, as I’m not feeling like ctrl+V’ing that. 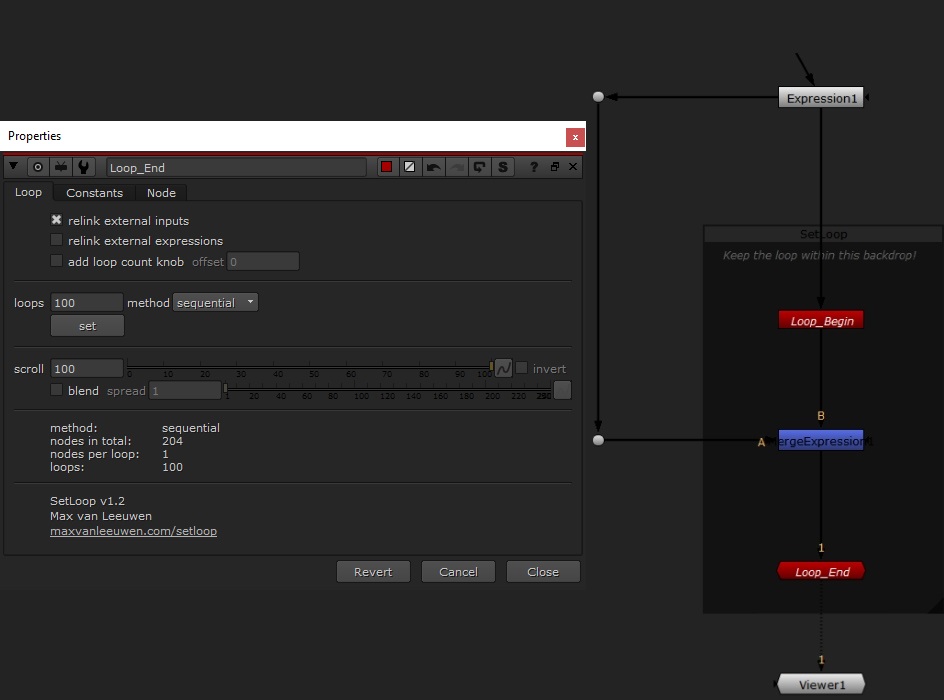 You will have to wait the first calculation out. This might take some time, but once it’s done you can scroll through it pretty smoothly!
You’ll see an extra input in EndLoop was created, to connect the nodes inside the loop.

The RGB result is on the left, and on the right is the alpha divided by EndLoop.loops (since we made it add 1  to the alpha per iteration, it should be normalized to the amount of loops to make that visible in a render):

The STMap-node (set to Alpha) can be used to give this Mandelbrot some nice colors, and by multiplying or adding to the width and height in Expression1 the Mandelbrot can be translated and zoomed in on.

Another example included in the download is the Julia Set, which has a variable C component – meaning you can make cool animations with it: 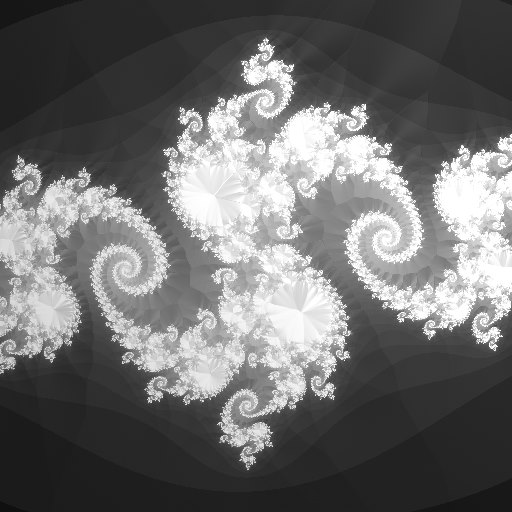